A day out for Mrs. Woody!

Today I took Mrs. Woody for a day out to the Spalding Model Railway Exhibition! Not sure if she knew she was going but she went and as I highlighted to her she could not only enjoy my company and the show but also see first hand how little I would spend there!

The exhibition was brilliant. Some really good layouts, good selection of traders all well laid out and lots of people talking and chatting, including me. I had not realised until I thanked a member of the club on the way out that this was the Spalding's club first exhibition since the pandemic.

Layout wise I will highlight a few from the many there - they were all great but some had those little things that make you think WOW!

Firstly is this layout called Kozel and based on a cement works in Czechoslovakia. I really showed my skills of observation when I asked the operator on which country the layout was based. He said Czechoslovakia and then highlighted the large Czech flag on the front of the layout which you can see in the photo below. Oh well sometimes you just don't see these things! 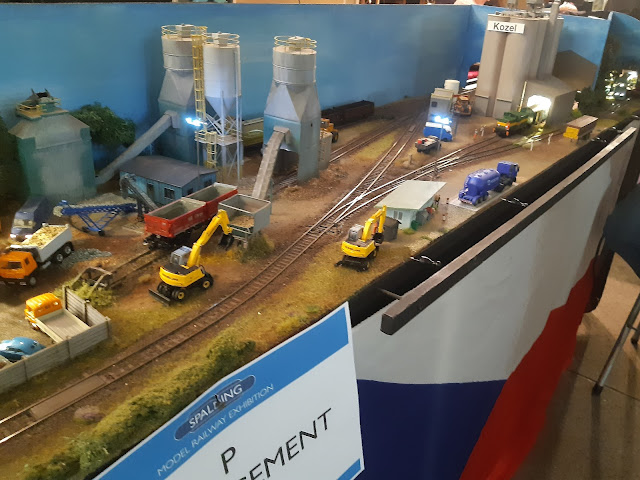 What I did observe though was the inside of this office building. Superbly modelled with office staff at desks and filing cabinets and although I thought I had seen it all in the model railway world I was about to be further educated. In this building even the computer monitors were illuminated! You can just about make them out in the photo below on the top floor left hand office. A brilliant touch and one I have never seen before.  . 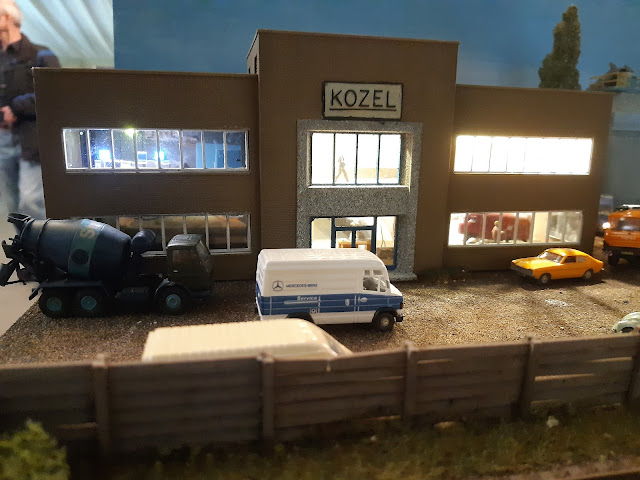 Copper Wort is an 00 gauge layout based upon the brewing industry in the early 1900s. A superb model with loads of detail all scatchbuilt by its owner. The layout featured recently on the TV series about Hornby. 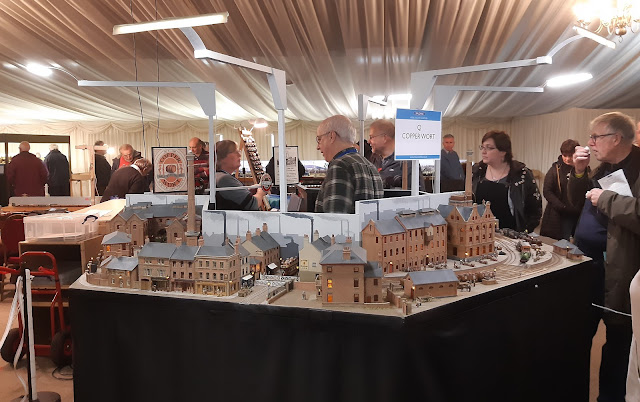 The owner even sculpts and casts his own figures of which there are many on the layout. back in those days labour was cheap and the work hard. 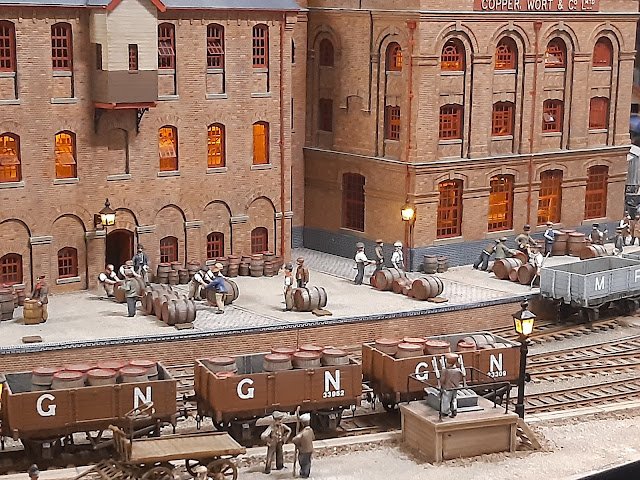 Modelling of this type really captures the atmosphere of the time being portrayed. It takes skill to make and compose all the elements in scenes such as this. 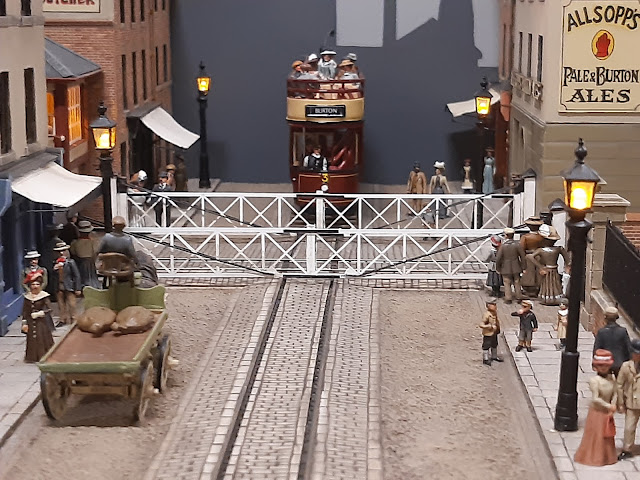 Moving forward in time to the 1970s this rather large but equally atmospheric layout 0 gauge layout called Netherwood played on the griminess of that period on the railways. It was a time when the Country was going through economic problems and there was no money to modernise or maintain the railways. 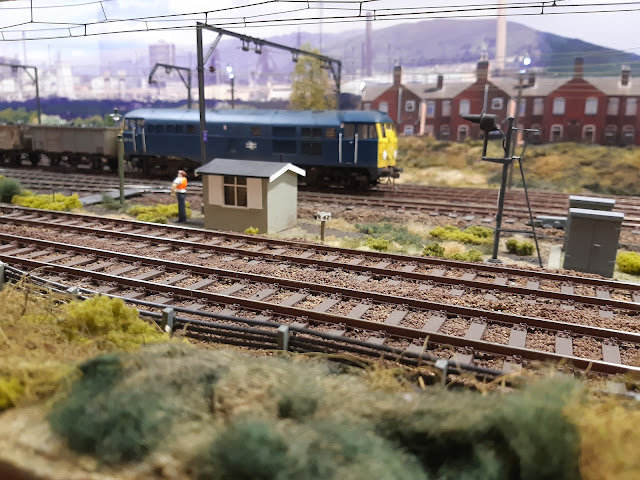 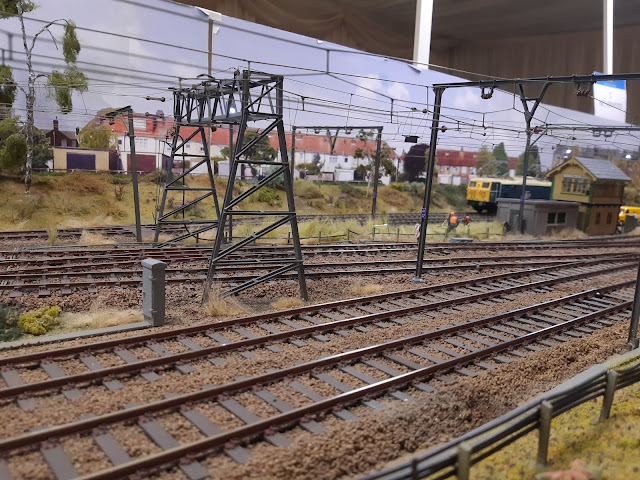 All that detail is possible in 0 gauge and the layout looks fantastic. 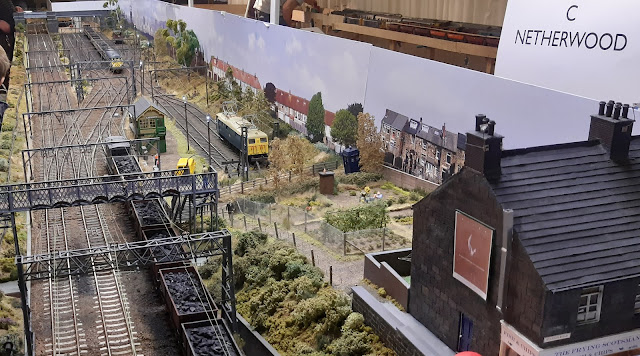 However there is a price to pay - the space needed. This photo of the fiddle yard shows just how much space is needed for a layout depicting longish trains. It has to be at least 30 foot long by 15 across. Nice if you have the space.

Talking of space no model railway exhibition is complete without a Darlek or two. Mrs. Woody found this one hiding in a station building. 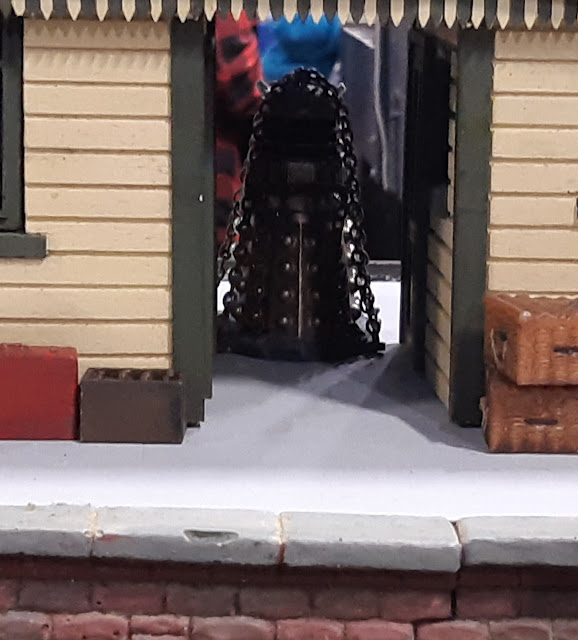 I could go on about the layouts and fill this blog with lots of pictures but I will leave it there and conclude by saying that Mrs. Woody did admit to being impressed! As to my spending? Well lets just say that my wallet is somewhat thinner than I intended it to be which didn't really impress Mrs. W but as I said to her my company for her today is priceless although deep down I know it is going to cost me!